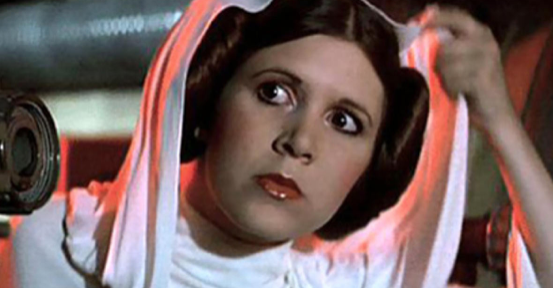 Among the multitude of tributes, tweets and headlines mourning the death or Carrie Fisher and celebrating her life, one that is perhaps the most befitting of accolades, came from her Star Wars co-star Harrison Ford. 'She lived her life bravely'.

For those born after the Star Wars phenomena exploded into our galaxy and changed the face of cinema (as well as its marketing and merchandising) and heralded a new age where audiences camped out for nights in great swathing lines around their local picture house, what film was like may not be remembered.

We all grow up entranced by fairy stories. Whether they come via grandparents sitting at the edge of our beds with picture books, or fifteen foot screens transporting us to galaxies far, far away, they seep into our subconscious and in a small part form who we are as human beings. Such is the power of storytelling and the power of film.

Before Princess Leia burst onto our screens at five foot nothing, squaring up to a nearly seven foot Darth Vader like he was a b'tch she owned, female characters were often under written and sometimes insignificant, especially in the action adventure genre, silly things, always waiting to be rescued from the ridiculous scrapes they wound up in by the male of the species.

But Princess Leia soon put pay to such stereotypes and generalisations, tough as old boots, acerbic tongued and a natural leader. As equally unafraid at telling Grand Moff Tarkin that she recognised his 'foul stench' as she was about telling Han Solo that she loved him. However when the biggest serial moaner in the universe, Luke Skywalker, threw a diva like strop about the new best friend he'd known less than a day, Han Solo, going his own way, it was she who defiantly told Solo to 'go do one' and reminded her unbeknown twin that each man chooses his own path, no one can choose it for him.

While never considered a feminist icon, Princess Leia certainly demonstrated to girls growing up in the 70s and beyond that they could do anything they put their minds to, with or without a man. That they could stand tall no matter their height and face off against even the meanest and most towering of bullies. That vulnerability doesn't mean you're weak. That women could match men in grit, determination, stamina and strength and still have grace and beauty. That anything is possible in this world or the next and that life should be lived bravely.

But is this all down to the character? How much should we thank the actress who breathed the life into what has now become the most recognisable of all archetypal heroines?

Carrie Fisher's life was a complex one. Both privileged and pitiful. Deprived of a father, of obscurity, in her childhood to be recognised first as the child of the famous, then forever more as the most famous of fictional characters. It would have been a bewildering way to live. And whether it was nature or nurture is unknown but her battles with addiction and mental health, although well documented, were private ones, unlike the courageous battles fought by a space princess for the world to cheer to from an auditorium, her greatest battles she fought alone.

And so Harrison Ford's tribute to her is perhaps the most poignant. Not only did she live her life bravely. But that courage, in the face of towering oppression, both the character and the lady behind it, encouraged my generation of women to live their lives bravely too.

If she'd never come along, if George Lucas had never had the tenacity and strength to stand against those who ridiculed him and created such a phenomenon, if Carrie Fisher hadn't poured her own soul into that billowing white dress with such unapologetic feistiness would women like me lack a little of the toughness and temerity needed to see our own battles through to the end?

Who can say? But I'm a storyteller and know the power of stories and the power of film and what it can do to those it reaches. So I know what I believe and for one, will always thank her for the human being I became because she came along.